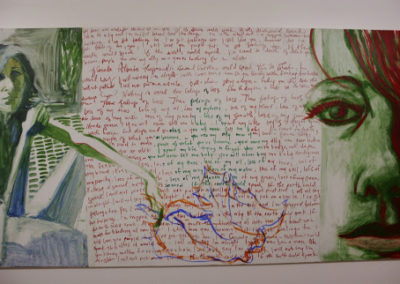 If Earth could speak, I gave our planet the angry words of Martha Wainwright; kind of a mash-up of lyrics from many songs on her album ‘I Know You’re Married’. Her words are mixed with specifics that the Earth (imaginably) would consider as precious and would mourn if they were lost. These Earth specific things include “my fresh air, my clean water, my oil, my blood, my trees….”. 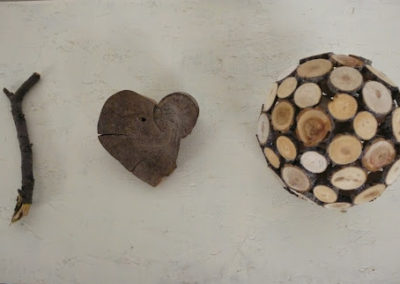 The sphere made of wood discs is actually a maquette for a Public Sculpture Proposal for the village of Bowness, inside the City of Calgary, to commemorate the enormous loss of trees, as well as, the tremendous efforts of people to restore order, after the outside-the-200-year flood destructive event, in 2013. 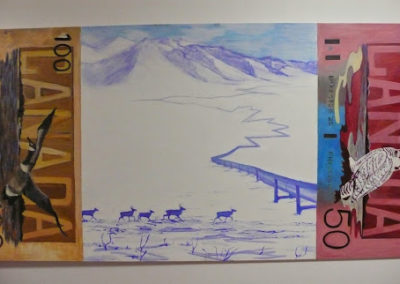 Is the destruction worth it? In all these images the flag is suggested, deformed, fading, hinted at, remembered. This is Canada but far from the country we knew. It is transforming, being transformed before our very eyes and some of us want to keep our nature intact. We have an opportunity to showcase, share and protect some of the worlds wild spaces and places and creatures. What of their rights – those sentient beings, those live but non-voting parts of our natural world – the trees, the rocks, the minerals, the animals, the soil, the air, the water….

Why does everything have to be extracted, cut, removed, sold, shipped to be valued. Why does it have to become a commodity? Carry a price tag? Can we not learn from other countries who have stripped their raw nature bare and now need to buy ours? The conversation is beyond primary industry vs. tertiary industry. It is beyond employment, beyond jobs and profit. Can we talk about resource depletion, rights of non-human entities, about the end of commodities and their exchange for money?

Is the conversation, at last, about being true stewards of the earth?

It is about Climate change, undoubtable at this point in time. Undoubtably, due to human activity. The Anthropocene – the age of human dominant influence on climate – is recognized; we are in it. Right here, in this country, our country of Canada, we have so much beauty in raw nature yet our government is allowing it to be destroyed. How short sighted can they get for a measly buck? How much healthy present and sustainable future can they put on the line for mere profit? How can capitalist gains possibly trump climate-necessity?

There is no room to grow endlessly, building, opening new franchises, filling the roads with new cars, covering the arable land with suburbs, filling the neighbourhoods with big-box stores full of things so we can fill the little boxes – the houses – with more and more. When do we stop?

There is no room. Certainly, the landfill sites are finite. We can’t keep filling the land, filling the ocean; the earth can’t take it. There has got to be a saturation point. Even if the climate was not being affected, can we really keep littering, using, wasting, buying, selling, planning obsolescence, indefinitely? The population cannot keep growing just to refresh the market with new clients and buyers. We cannot feed or care for so many people without depleting Earth resources in permanently damaging ways. Something has to stop. The endless growth and demands of capitalism cannot be sustained. We have to rethink our values and define just what it is that we value – money or nature, money or life? M.L.

Below, a quote by Toronto film maker, Rob Stewart, describing truths learned about Canada while making the film, “Revolution”, underlines this message: “Another big surprise in the making of the film Revolution is Canada’s involvement in the destruction of our life support system. As Canadians you think, ‘Canada’s a great country environmentally. We’ve got these huge wild spaces, we birthed Green Peace and the Environmental Movement. But the truth is far, far different. We are one of the worst countries environmentally and we’re so bad that we are given awards by the Environmental Community every year for being so destructive and for inhibiting any other country from coming to an agreement to stop climate change and carbon pollution. Canada is profiting so greatly from the tar sands. And we thought we needed to bring that into the spot light and make sure every Canadian knows what’s going on and knows why Canada has make it through the recession like we have.” http://revolution.motionseason.com/#!movie-trailer 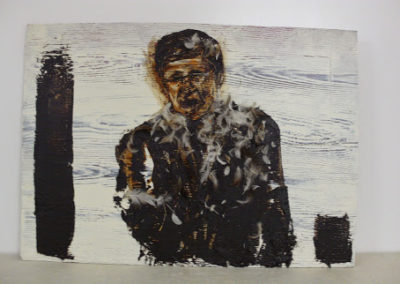 INTERNATIONALLY, HOW DOES CANADA MEASURE UP? Tar Bar Graph, Portrait of Stephen Harper, 2014, tar and feathers on board, 2′ x 3′ 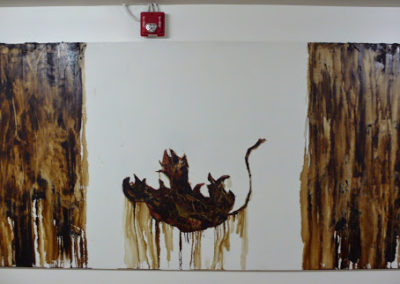 Climate Action Network: “Today, [Canada’s] reputation is being undermined by the oil companies extracting dirty oil from the Alberta tar sands. These companies, along with some government officials, are aggressively expanding the tar sands and pushing Canada’s oil on the world and blocking effective, smart policies to fight global warming in Canada, the United States, and Europe. All the while, Canada’s wilderness and wildlife, clean air and fresh water are being contaminated and destroyed.  Pipelines across the United States and Canada carrying tar sands also pose major risks to the ocean, lakes and rivers, lands and wild life. Burning tar sands oil creates more carbon pollution than conventional oil.” 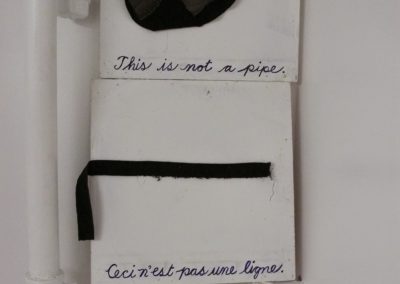 A CBC news report states, Desmond Tutu, during his visit to Alberta, said about the the tar-sands and pipeline issues, that they are ”The most important struggles in North America today.’ “Tutu argued that humanity must act together to end a threat that is already affecting people around the globe. ”

“This is why I have stood in solidarity with communities across Canada and the United States that are opposing the proposed oil-sands pipeline,” he said. “The struggle of citizens against the pipelines puts them on the front lines of the most important struggles in North America today.”

Despite his uncompromising rhetoric, Tutu urged people from all sides to work together. He pointed to the experience of his own country overcoming generations of racial intolerance as an example of how widely differing positions can be brought together through mutual good will.

Playing with Rene Magritte’s original surrealist concept called The Treachery of Images, this art piece considers a different kind of treachery, that by politicians and large oil companies/corporations. It is anything but surreal in the case of the proposed oil pipelines. The threat to nature, to a healthy environment, to habitats of living things and to people, is all too real. The fact of the short-sightedness involved regarding our climate is nearly surreal.

We need to redirect our human ingenuity, imaginative abilities and creativity, exemplified by Magritte and other such innovative, thinking-outside-of-the-box artists, into solutions for climate change, as well as, actions of harmony with nature and good stewardship of the earth.

Art is a survival. ML