Found wood from the recent, unseasonably early devastating storm in Calgary mixed with Found wood from a clear-cut site found while tree planting years ago 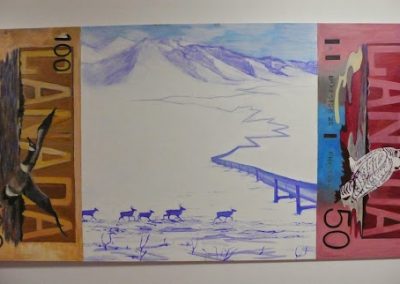 The Price of Money 4’x8′. Acrylic on Board

This is actually the first flag theme painting. It weighs the value of the environment against the value of money. Is it worth it? Is the destruction worth it? 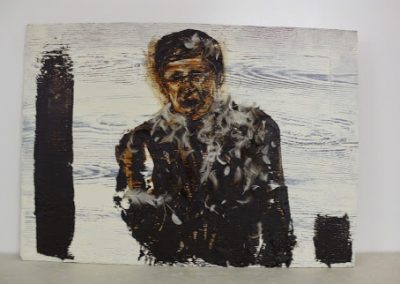 What kind of leader sells his country, its mineral rights, destroys the non-renewable resources, does not uphold our part in Kyoto, does not attend the international climate change meeting in NYC in September this year ….. the list is long …. 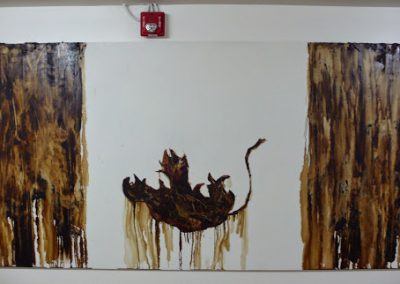 It is out of embarrassment for our reputation abroad that I painted this. Once we were a leader in caring for the environment, now we are leading in it’s destruction. 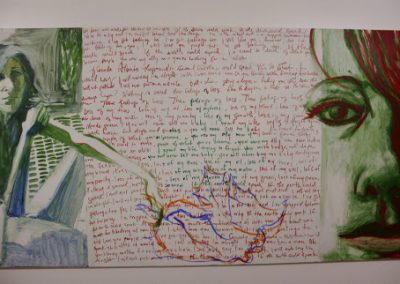 If Earth could speak… 4’x8′, Acrylic on Board

If Earth could speak, I gave her the angry words of Martha Wainwright, kind of a mash-up of lyrics from many songs on her album ‘I Know You’re Married’ mixed with specifics that the earth would feel are precious and mourn when they are lost. These Earth specific things include “my fresh air, my clean water, my oil, my blood, my trees….” (I will write out the full group of statements.) The flag’s flashes are portraits of Martha Wainwright. She visited Calgary to open for the Annual Honen’s piano competition. I got to attend and she blew me away – I was so inspired. She stopped singing at a point and told the people who were talking so loudly that they were welcome to go outside, after all, it was a nice evening and there was plenty of room out there. Then she said she would just wait until people quietened down. This is just what I do with the rowdy grade 6’s at school, and it works! Martha had such courage to stand up for her values and make people pay attention. I thought – I will draw on this courage and I will get started on my tar flag painting that is flying around in my head at the moment. I planned to use her portrait only as an underpainting, my private source of strength and courage to put my values out there, to get the images down. Then, during the process, I started to like that image too much to cover with tar so I worked it into what it became and then did another of the flag, no need for underpainting. The fallen leaf motif – the fall of Canada – repeated.